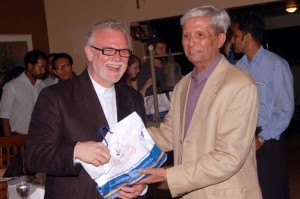 The journey of Bangla Language Institute started in 2006 with the launch of the Critical Language Scholarship (CLS) program, created by the U.S. Department of State, Bureau of Educational and Cultural Affairs, offering intensive summer language institutes in thirteen critical foreign languages. The CLS program formerly administered by the Council of American Overseas Research Centers (CAORC) in Washington, DC, approached Tony K Stewart, Professor and Chair, Department of Religious Studies Vanderbilt Universtiy to set up a Bangla language program in Dhaka, Bangladesh in response to the detailed proposal the US Department of State saw fit to inaugurate a wide range of summer intensive language training programs utilizing the resources of the various overseas research centers.

In June-August 2006 and again in June-August 2007, the CLS Bangla program under the name of Bangla Summer Institute (BSI) was conducted on the campus of IUB (through subcontract) under the auspices of the American Institute of Bangladesh Studies (AIBS), with funding from the US Department of State, Bureau of Educational and Cultural Affairs (ECA),“Critical Languages Program,” administered through CAORC.

After BSI 2006, it became apparent that the program desperately needed to develop a more rigorous curriculum and to develop many more pedagogical materials.

At the request of the Fulbright programs (Council for the International Exchange of Scholars [CIES]), the decision was made to offer academic year training in regular semester increments when BSI was not in session. As a result of the success of the Bangla Summer Institute, and through a recommendation by the American Center in Dhaka, the Institute of International Education (IIE) in NY requested a two-term program for their Fulbright English Teaching Assistant (ETA) and Research fellows in 2007. As a result of a new initiative, Fulbright now funds select fellows for up to three months of language study at the beginning of the teaching assistantship and research program. The program was opened to all qualified students and professionals, designed to provide a service of language instruction. To that end, four full time instructors are now placed at Bangla Language Institute to provide quality instructions of Bangla as a foreign language at different levels.